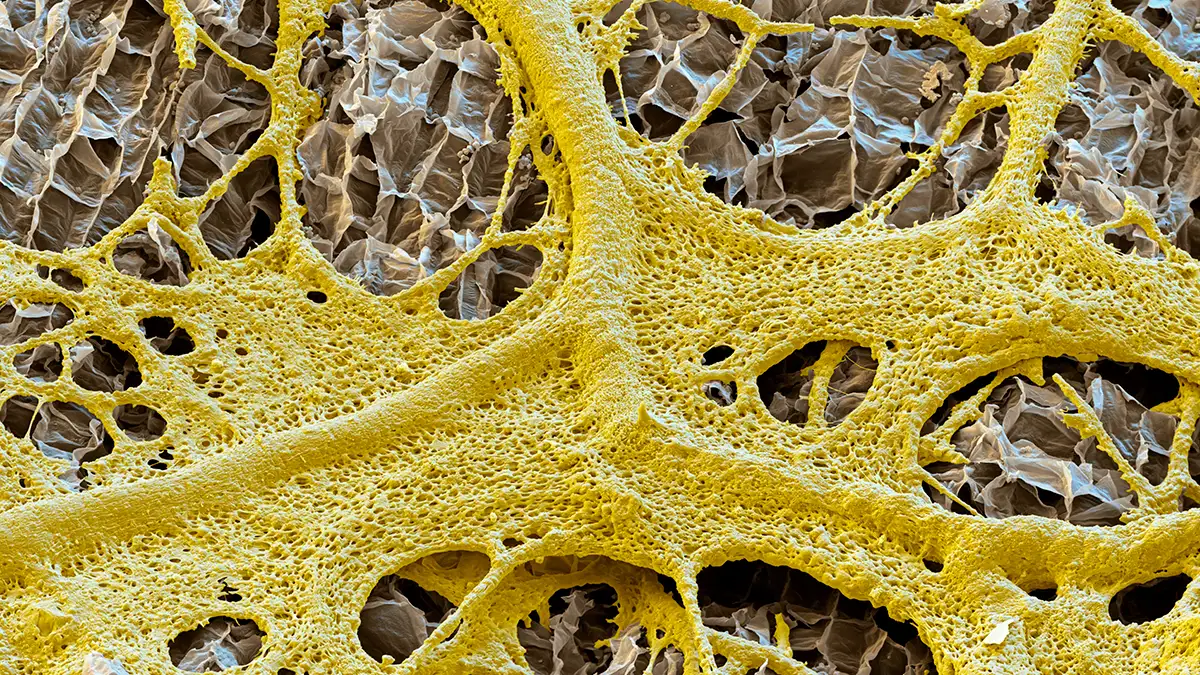 My privacy screen is inspired by the Physarum polycephalum (slime mold), a kind of mold that doesn’t have brian. Slime mold experiment starts with a point where to place the origin of the mold, then many points of food will be put into the environment. After that, the slime mold will chase the food, and this will generate a path to a certain type of pattern. The pattern generated by them is quite compelling. Through the research of slime mold, it is fascinating that it can form a path that is efficient, even though they don’t have brains. Researchers put them onto the map of Tokyo and surprisingly found that the pattern generated by slime mold is similar to the train system.

Thus, I want to explore this type of algorithm to make a privacy screen. Thinking about the privacy screen, I don’t want it to be a totally private space. Because I think this may cause the fear of the unknown. It is horrible that you walk pass it but not knowing if there are people behind it or not. Respond to this, I have the idea of making it thick at the bottom and thinner for the upper part.

I used Physarealm to create the growth of the mold. Then I turned them into lines and pipes. But because of too many mesh surfaces, I have to change another way to process those meshes.

Then I used Dentro to give thickness to those lines. And another good thing by using dentro is that I can differ the thickness of the lower and upper part. 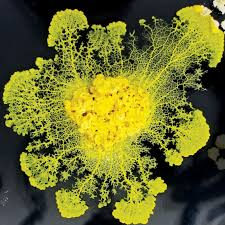 After that, I found out that after certain growth of the slime mold, another generation of spreading is taken place. Then I started to test the addon by pufferfish. And then change the thickness of the addon. By making them thick, I found that the lower part began to be the part that can be seen through.

Accidental new observation: The AR of the main part of this privacy screen actually hides the mess of my apartment super well.

Hello, everybody. I am Yuxi Wang. My project of the Privacy Screen is about a breathing wall. My initial thought is to create an installation which allows air movement in and out a giant glass fixture, which create expansion and shrinkage inside. The inside contents are like “balloons”, with very foamy, airy, and soft fabric, which would visualize the air movement and create visual block and penetration.

With my initial though, I found this reletively more solid examples to show my two goals: the first is to create a rhythmatic alternation of the gap of opening and closeness; and the second is to add thickness to the installation for certain angled perspectives that allows visibility.

And below is my final results.

The project explores visual connections between people, which can be a prototypical privacy screen for post pandemic days. It can also be explored in scales that could accommodate different functions in space.

Initially, I was looking into creating a dynamic shading screen system, which would correspond to the sun path (also speaks to my first project: 2D patterning).

Throughout the process of this project, from patterns testing to ShapeDiver testing and to material testing, the privacy screen has ended up with a series of modular triangular panels with metal finishes.

In the final Grasshopper script, I introduce triangular shades by using triangle panels tool from LunchBox and then detail the shades with the fillet tool to create smoother edges at all three ends.  Also, creating a sun path system controlled by adjustable sun path angles and the time of the day.  Lastly, in order to control the dynamics of the shading system, I link the triangular panels and the sun path system together with the surface analysis tool and vector tool. Finally, for the final look, using the ShapeDiver preset material to create a metallic and reflective look of the privacy screen.

The ShapeDiver AR mode is extremely interesting and helpful to implement this private screen project in real life. By allowing to  adjust the scales and change the parameters of the sun paths, ShapeDiver tool showcases this dynamic shading system successfully and explores further possibility of the private screen, which may be also implemented indoor when the dynamics can be associated the level of sound other than the sun path.

Overall, a fun project and a fun semester. Hopefully, more opportunities to explore parametric in the future. Thank you Ben!

As an architecture student who has recently started taken morphology classes, I have become very interested in parametric modeling, specifically for the purpose of creating smooth minimal surfaces, with no hard corners. In order to model these types of shapes, parametric modeling tools are needed because the software we have is not meant for this type of freehand modelling. With this interest in mind, I immediately knew what type of form I wanted to create for the Privacy Screen. I began researching grasshopper plugins that could be used to create this type of form. By using Kangaroo, I could create a networked vault that creates a hyper smooth minimal surface based on the input of only a few lines. I then created a script that you generate a series of interconnected lines, that varied in terms of radius, offset length, and number of sides. This gave me a wide array of forms that could be created using on a few lines. I inserted a component that also changed the strength of gravity. Once I had this surface I used Weaverbird components to create a pattern within the surface that allowed for gradients of privacy depending on the Z Axis. I also added a component that would change the thickness of the screen. Overall I would consider this experiment to be a successful one. I was able to create a vast library of minimal surface screens, however if I had more time I would like to improve the texture of the surface as well as add more variety in the patterning, maybe randomly closing some opening or combining some to make certain openings larger. I would also like to improve the consistency of outputs, with some not even connecting at all, however this did lead to some fun discoveries as I was going through the series.

My initial idea for this AR privacy screen was mist and fog, which had beautifully curved geometry and excellent performance on lightness. Observing mist in the microscope will become suspended tiny droplets of water; their curved geometries depend on the conditions under which they have formed and the size of the water droplets as well. Another potential benefit is that mist or fog can create a soft, diffused effect that allows people inside a building to see out while still maintaining privacy. This could be particularly useful when people want to allow natural light to enter space but maintain privacy.

My basic form of the screen is transformed from the geometry of rising mist. It is curved and floating, surrounding people with it. It has a unique and distinctive appearance while also providing privacy and visibility as needed.

My screen design is divided into three parts: two major curved metal surfaces with hexagonal apertures, the top and bottom suspended colored balls, and the middle variable curved pipe. These parts are formed by three curved lines, as I had in the initial sketch model.

Firstly, the two major curved surfaces play a role in showing the curved geometry of mist. Their edges are tween lines formed by default curves, so the geometry of surfaces could be varied by changing the factor of tween lines. The materiality of the surface is metal with changeable reflection and roughness factors to perform different types of metal feelings. Here is a detailed variable pipe to profile the edge of surfaces, following the same varying logic with top and bottom suspended balls. The density and dimension of hexagonal apertures on surfaces could also be varied. Here are suspended diamonds in different colors located at the center of apertures to imitate the suspended tiny droplets of water, and the size of them following the same varying logic with the size of apertures.

Additionally, the top and bottom suspended balls show lightness and suspended droplets. Their density, size, and color are variable in a particular range.

Finally, the middle variable pipe reflects the process of gas rising from concentration to dispersion. Hence, the pipe thickens from low to high. And the ratio of varying and radii are changeable in a specific range.

Some progress from the last discussion. I got rid of using pipes to connect suspended balls (like “double-head lollipops”) and started to create curved surfaces following tween lines formed by the default curves. For the curved surfaces, I plan to give them variable apertures to perform the gaps among the rising mist. The second pic is a quick try but still need more further polish.

This is the final iteration of the Privacy Screen project. Two hotspots were designed to manipulate the threshold of the screen according to their proximity to the surfaces. Shapediver model grants users the ability to manipulate the x, y, and z coordinates of the hotspots to control both the location and the integrity of the openings based on their intent.

The initial idea came from building a partition that is easily manipulatable, and mass-producible afterwards. Hence, the geometry has been strictly limited to rectangular shapes and some pipes to ensure the ease of production.

The final outcome has turned out the way I’ve intended, but there could’ve been more realism on rendered materials. Although the technology has developed enough that it could be activated using cellphones, the rendering seem to have a way to go.

Something that I could’ve done better on was adding details to make the practicality more fine tuning. Panels were almost being supported by nothing when they were contracted, which pulled back its believability away by a step.

Above are some recent images of the privacy screen project. I suppose that the generic flow of components has been figured out, and it would only be a matter of producing 100 different configurations from this point. However, this week I encountered an issue, in which ShapeDiver couldn’t ingest all the components in the definition. The question as to what exactly it is referring to when it says “quantity” shall be figured out in today’s desk critique.

This time I tried the Pufferfish-Tween curve based on two basic curves to create more variability for the screen. The basic curves were hidden and profiled by spheres of different sizes and various colors. For the pipe part, I replaced the normal pipe with a pipe variable to make them change more smoothly.

When I tried to play with AR in Shapediver, this kind of weird purple color was shown, maybe it was due to the mess in my home which made it the model hard to find the dimension of space. (which was because of the final, and we don’t have time to clean it up… :(

I also scaled it to give a “smaller screen” to my cat! (looks like she enjoyed it :D