the first part of the programming establishes the center point & outer limits of the referenced geometry to act as the limits of the operation. The (2) highlighted lines are the axis from which the ribs will spring.

the second part establishes uses a slider to change the number of divisions along the (2) axis, establishes planes at each division + measures the distance between divisions (at the right). The other (2) sliders control the rotation of the planes about the Z axis. 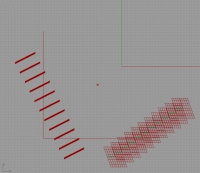 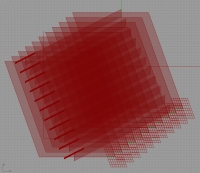 the third part establishes uses (2) sliders rotate the planes about the X & Y axis, draws rectangular surfaces emanating from those planes, and uses the referenced geometries to create intersections between those planes & themselves. 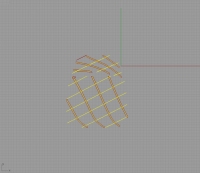 the fourth part uses a minimum area as a parameter, discarding the intersection-shapes too small to be viable. The large-enough geometries are surfaced & rendered.